the world's first female war correspondent,
and the first person to accuse Joseph Snodgrass of murder.

Based on a story that may very well be true. 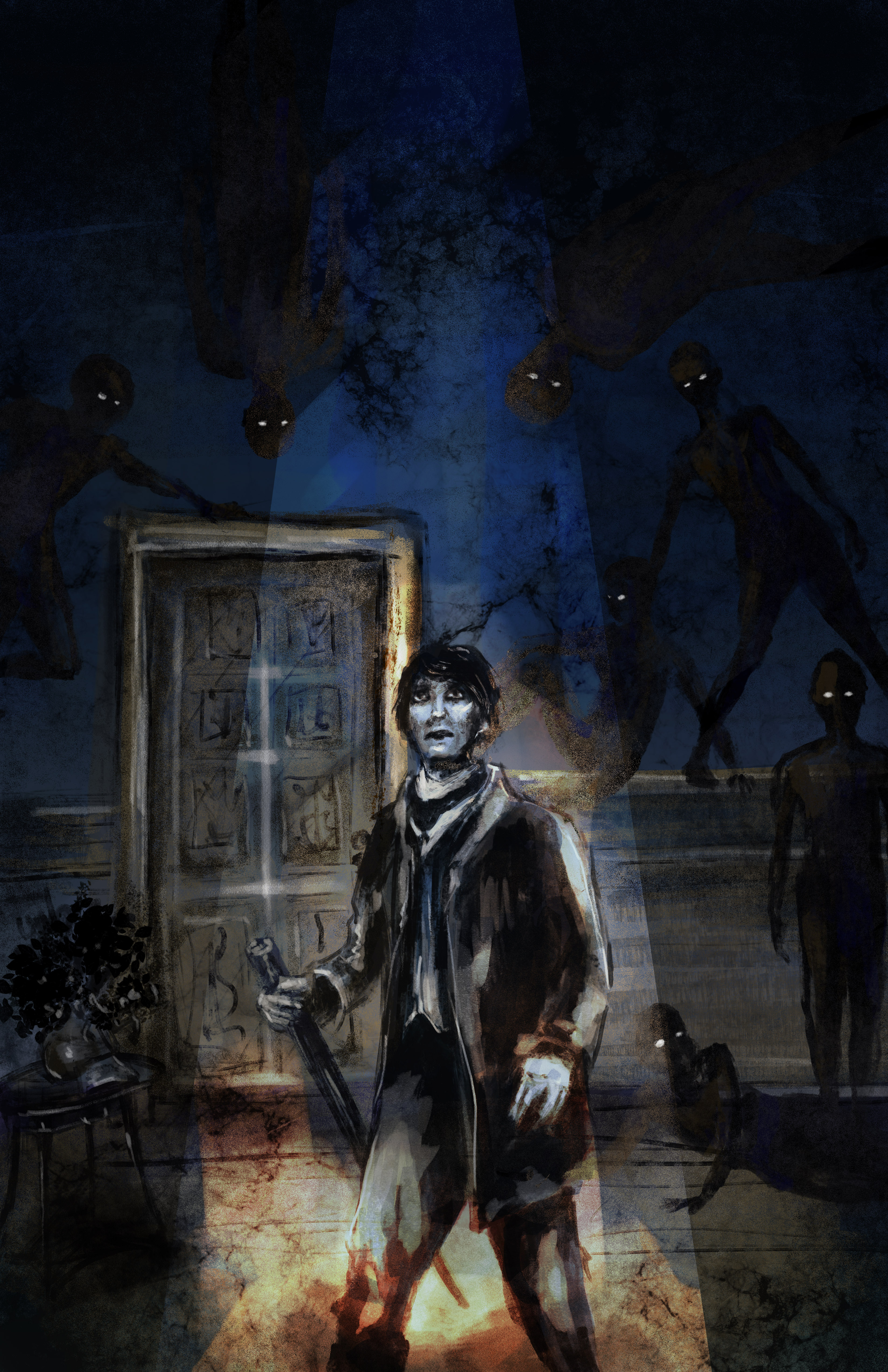 The True and Unquestionable Account of Dr. Joseph Snodgrass is an environmental, musical play about the man who fabricated many of the facts we still believe about Edgar Allan Poe today.

Why did he lie?

We call our show “Environmental” (rather than “Immersive”) because while the audience stays in one place, the action takes place 360° around them. It is our greatest hope that our audience can be placed on swiveling seating, so that they can choose which action to follow at any given time.

Though there is music and dance, we define our show as a “Musical Play” (rather than a “Musical”) because no character onstage sings. We will, however, have a trio of female singers as part of our pit, who comment on the action the way a film score would. 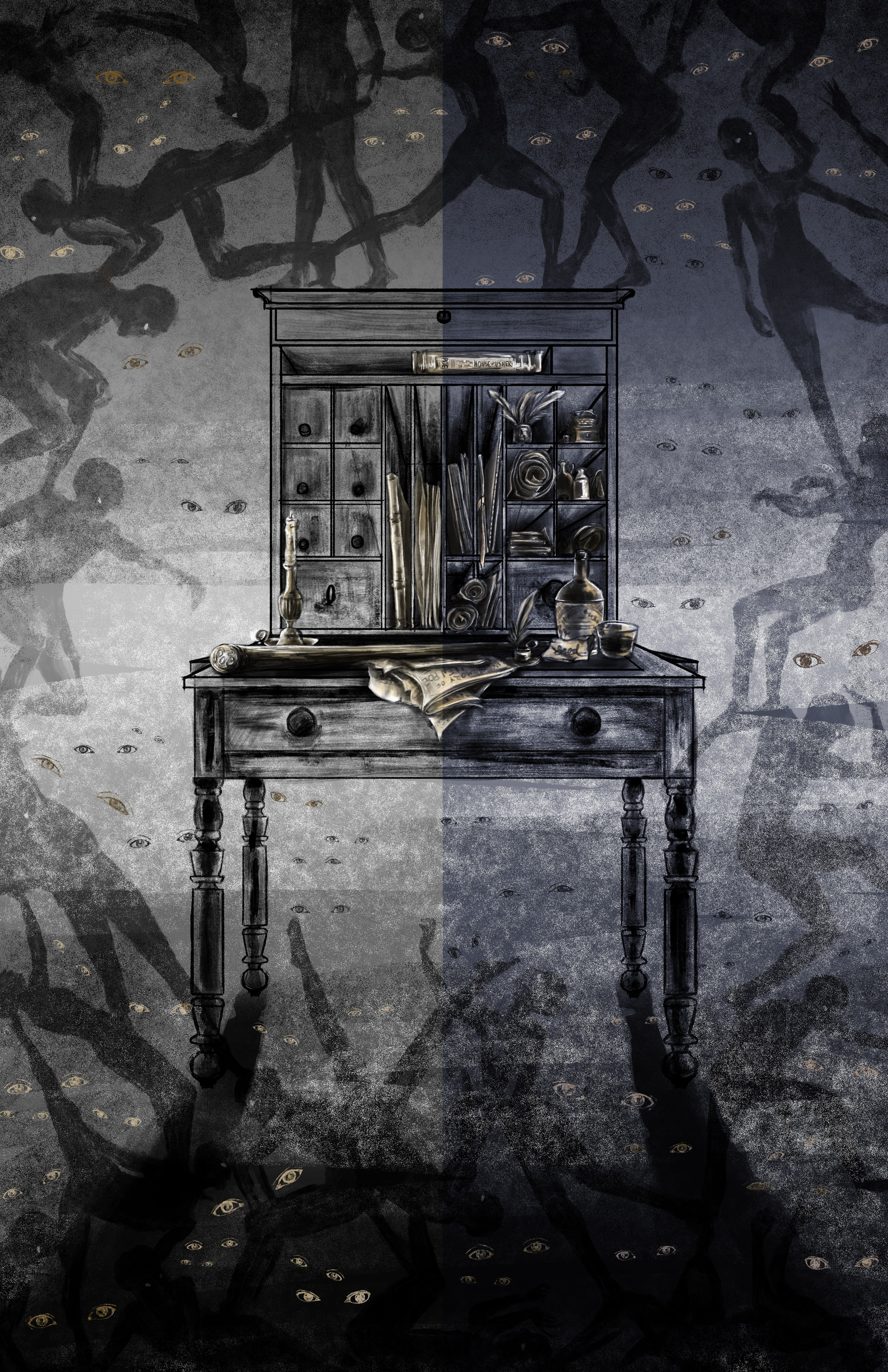 Sometimes the truth is stranger than fiction.

Set in three overlapping timelines, the play walks a tightrope between drama and thriller, and sits on a knife's edge between reality and fantasy. 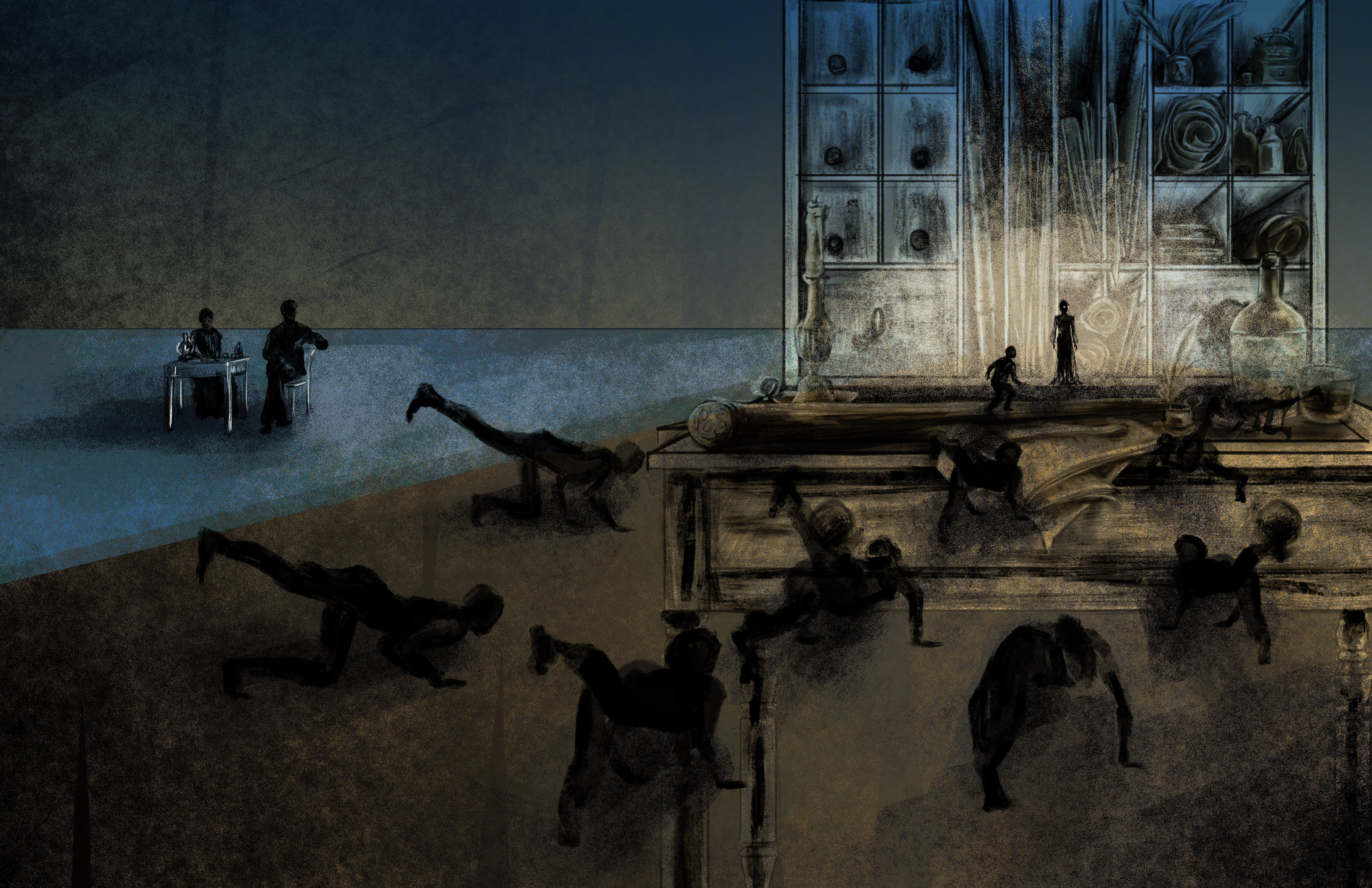 It is the story about a man on the edge of sanity, a real-life murder plot, and a house that manipulates the nature of reality.

Question everything you think you know.

(Choreographer, Writer, Co-Founder)
Ashley is an Helen Hayes Nominated and IRNE Award winning dancer, actor, choreographer, director, and filmmaker who is based in NYC. She is a proud graduate of NYU’s Tisch School of the Arts (B.F.A. in Dance, B.A. in English and American Literature) and the Salzburg Experimental Academy of Dance in Austria. As a performer, Ashley splits her time between the concert, commercial and musical theater worlds. Favorite performances include music videos for Justin Bieber and Mariah Carey, concerts with Ne-Yo, Lady Sovereign, Shakira, and Shangela. Choreographic collaborations include work with Susan Marshall, Jill Johnson, William Forsythe, Andrea Miller, Sidra Bell and Andy Blankenbuehler. Musicals include An American in Paris, Newsies, West Side Story, Mary Poppins, A Funny Thing...Forum, and White Christmas. Directing, choreographing and writing credits include events for the Walt Disney Company, Stranger Sings: The Parody Musical, Dorothy Parker: The Musical, An American in Paris, Newsies, The Donner Party Project, Fairy Tale Christmas, Once Uponzi Time, All Underdogs Go to Heaven, Techies, benefits for The Trevor Project and Planned Parenthood and The True and Unquestionable Account of Dr. Joseph Snodgrass (an environmental play). She lives in Brooklyn with her partner and her puppy.
www.ashleymarinelli.com @alm433 @josephsnodgrassplay

(Creative Producer, Co-Founder)
Greer Gisy is a world traveling performing artist. She is the Dance Supervisor of HAMILTON Angelica Tour and the Creative Producer of the multimedia theatre in motion play: THE TRUE AND UNQUESTIONABLE ACCOUNT OF JOSEPH SNODGRASS. As the choreographer and creative consultant, she was responsible for setting Andy Blankenbuehler’s original Broadway choreography on the Brazilian cast of IN THE HEIGHTS in São Paulo. Greer has taught for Alvin Ailey, R.Evolución Latina, Broadway Dance Center, Texas State University, Syracuse University, London's Pineapple Studios and D & B Performing Arts Academy, among others. She has served as associate director and associate choreographer to Michael Balderrama on many shows including two new works for HOLLAND AMERICA CRUISE LINES and was the dance captain for EVITA under the direction and choreography of Nick Kenkel. She helped create movement and content for the world premiere of WHEN CHANGE COMES conceived, directed, and choreographed by Mark Stuart and Jaime Verazin. Greer was Lorin Latarro’s associate choreographer for both of Public Theatre's Public Works productions of TWELFTH NIGHT at Shakespeare in the Park, and serves annually as the Associate and Supervising Choreographer for McCarter Theater's renowned A CHRISTMAS CAROL. Greer is founder of the app LALUZ: Meditations for Performers, and has a scrappy rescue pup named Blanche DuBark.
@greergisy

(Director)
Mary works as a director, photographer, actor, and the artistic director of HoosierMuse, a devised-theater collective in New York, New York. Mary came to New York with a BFA from Millikin University and has continued her post-graduate work training extensively with the SITI Company and collaborating with artists including R Osh An, Matt Nakoa and The Move Shop.
www.mjcimage.net

(Composer)
Lily Desmond is an avant-guard violinist, vocalist and composer living in New York City. A graduate of Sarah Lawrence College, she uses her background in music theory, history, anthropology and writing as well as her performance vocabulary of folk, pop, noise, punk, blues, jazz, and Hindustani and Karnatic music to expand what people think music can be. She is a solo performer who uses loop pedal, guitar and violin to create songs and soundscapes. She is also a member of the band Sloppy Jane, recording session and pit violinist and vocalist (36 Questions, Brian Falduto, The Cave: A Folk Opera) and a music teacher. You can find her solo albums on all streaming platforms.
@lilygoddamndesmond Spotify, Lily Desmond

(Sound Designer)
Getting her start in the music industry, Roni started off strong with credits on the hit soundtrack for the award winning show, Glee. As well as assisting on countless other records and singles for artists like Wyclef Jean, Dropkick Murphys and live performance recordings of Sheryl Crow and David Gray, to name a few. Landing work in the post-production industry, her sound design, ADR, and SFX can be found in films and television shows such as Captain Phillips, The Secret Life of Walter Mitty, I, Frankenstein, Iron Man 3, Dexter, The Walking Dead, and Smash, among others. Moving into the trailer industry, she was nominated for an Emmy for Black America MLK: And Still I Rise as well as working on a mini series by Ken Burns called Vietnam and HBO’s The Defiant Ones. Always searching for quality projects that pique her interest, she can be found experimenting with sounds and design from everyday life to create a visioned soundscape. During COVID she wanted to find theater pre-production projects to get her ears on and has been designing for immersive shows, show cases, and workshops. When she’s not immersed in sound, you can probably find her in the woods of upstate New York foraging for mushrooms, in the woodshop bending ply, or searching for the best donut this side of The Miss (Voodoo has the trophy for West Coast).
@ronpill and @pillboxllc

(Associate Choreographer, Web Developer)
Jeanette Abell works as a professional dancer, choreographer and web developer. Currently located in Toronto, she is a Dance Supervisor with Disney Cruise Line. She graduated with her BFA in Dance from University of California Irvine under mentorship from the late Donald McKayle, and has taken on performance and collaborative choreographic roles with the Walt Disney Company, TCG, Garrett+Moulton Productions, and LEVYdance Company. She is sought after for teaching, choreographing, and adjudicating dance youth on both the east and west coasts. As a full stack web developer, she extends her love of iterative creative processes to technologies available online, and intends to blend technology and dance into future production endeavors.
@jeanettable

The project began in 2018, when Ashley and Greer were discussing their chagrin at the lack of originality among new theatrical projects. It seemed to them that very few risks were being taken, and they were also frustrated by the fact that even in an industry overrun with female representation, they seldom got to interact with other female creatives.

That day, they set out to make a show that excited them, and was representative of the kind of theater that they wanted to see.

We're a team of women-identifying people passionate about popularizing the accomplishments of real women who have gotten eclipsed by the male-centric historical record.

Capabilities of technology have finally caught up with our imaginations.

We're out to challenge the status quo, and to find excellent performers who tend to get passed over in the traditional casting setting in a way that feels long overdue.

By Ashley Marinelli
Several years ago, I read a book that mentioned how much fun Edgar Allan Poe was at parties. How he loved to make people laugh, and never passed up the opportunity for a practical joke. This did not seem like the dark and brooding Edgar Allan Poe I had read about in school, and I wondered what else I had been missing. So I went digging through the historical record, and I was shocked by what I found.
What struck me most, however, is the amount of women involved in Poe’s story. Smart, capable women who, even when they are mentioned in the historical record, are painted as mere accessories to Poe’s genius, rather than fully realized people in their own right, with their own significant contributions to history.
That got me thinking.
I wanted to offer a new perspective on the mostly male-tended historical record; I wondered what this story would look like if we put it through a female lens. So, I gathered an all-female team and we started creating. What has come out the other side has surprised us all, and made us question the way history comes down to us in the first place.
Though our characters lived on the east coast of the USA during the mid-19th century, they feel incredibly contemporary, especially in their individual quests for early American celebrity, their polarized political opinions, and their struggles with mental health. Though we think of these as modern problems, they aren’t at all. The roots go way back to the days before our country ever experienced a Civil War, and probably way before.

With Projection Mapping technology finally able to create the optical illusion of performers morphing in real time, and scenery growing and changing around our eyes, it is the perfect time to adapt this story about truth and lies, fiction and non-fiction, fact and fancy.
With the help of these new methodologies, we are able to create magical realism in real time, and make our audience question whether they are watching a live or digital performer, and otherwise fool, bewitch and trick the senses, making for a wholly unique and otherworldly theatrical experience.

This isn't simply goodwill, or performative inclusivity. It's really about using performers' unique abilities and/or differently-abled bodies to enhance our show and challenge us to explore new, and possibly better ways of making creative work. and provide us with a more layered and complex creative process.
For example, our show has a series of non-verbal characters which speak a detailed physical language all their own. The idea struck us that, not only would dancers from the Deaf/Hard of Hearing/ASL-using community be particularly suited to help us create this wholly new physical language (complete with grammar, syntax and dialect), but would also be the type of performers that would bring layers of nuance and reality to these characters. Therefore, we are currently working with Deaf community advocate, sign language interpreter and performer Brandon Kazen-Mattox to employ people from the signing community as creative consultants and performers.